Statement on the Peace Testimony and Ukraine 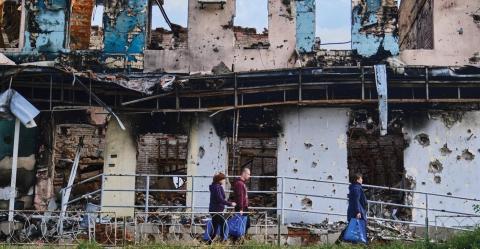 A statement on the peace testimony and Ukraine has been agreed and published by the heads of a number of Quaker agencies around the world.

The statement is given in full below, and can also be found at Statement on the Peace Testimony and Ukraine | American Friends Service Committee (afsc.org).  The statement was made following a small delegation to Central Europe which FWCC general secretary Tim Gee was part of.  An article by Tim providing some background can be found here.

Statement on the Peace Testimony and Ukraine

Quakers are a people who follow after peace, love and unity. Our peace testimony is our witness to the Truth as we experience it.

Our testimony manifests as a cumulative set of actions, continually tested and added to over centuries. These actions are diverse in form, but have been broadly united by:

1. Refusal to kill
2. Relief of suffering,
3. Building the institutions of peace, and
4. Supporting peacebuilding and removing the causes of war.

At the onset of the full scale invasion of Ukraine by Russia, the Friends World Committee for Consultation issued a Christian Call for Peace, affirming that invasion and occupation are the opposite of Christ’s universal call to reconciliation and unity, and echoing church statements in many countries, including Ukraine, calling for an immediate ceasefire replaced by a peacemaking dialogue. This call would echo the Golden Rule (Do unto others as you would have done unto yourself) which is a foundational value of all major world religions, has the potential to eliminate violence, and helps us to recognize one another.

Almost by definition, peacemaking often involves engaging with people making war and understanding the reasons they do so. Nevertheless, our vocation as a peace church is to seek and make real the peaceful alternatives to armed conflict, which with God’s help, are possible, and to ensure that the long-lasting human costs of war are not forgotten or neglected.

We continue to uphold the right to refuse to kill. We stand with conscientious objectors on all sides of this conflict, with the people in Russia who stand up against their leaders’ belligerent actions, and the people in Ukraine employing creative forms of nonviolent civil resistance.

We continue to help relieve suffering and hold that all nations must radically improve their approach to welcoming refugees, to fully honor the United Nations’ Refugee Convention and ensure that all displaced people—no matter their origin—have access to civil, political, economic, social, and cultural rights. We will continue to press for this.

We continue to seek to build the institutions of peace. Justice with peace requires binding frameworks of international law and restorative justice, as well as global investment in violence prevention at the community level. We know that all of these have been insufficient to prevent the injustice in Ukraine, and must be strengthened to win peace.

And we continue to support peacebuilding measures. We call on the governments of Ukraine, Russia, neighboring countries, the United States, NATO, and the European Union, to explore all avenues—whether public or private—for a renewed conversation to address the human security needs of all the peoples and countries in the region, to help provide the basis for long term peace.

Whichever way this war ends, we are realistic that healing and sustainable peacemaking will in all likelihood take more than a generation, and will only be possible through inclusive and sustainable processes from the international to the local. That process must begin now.

We are ready to play our part.