George Fox was born in troubled times in England. His upbringing was strict and until he was 19 he attended the local parish Church with his parents. He became dissatisfied with the religious practices of those around him and began to search for spiritual truth and nourishment. In 1647 through personal experience he came to understand that all people could have a direct personal experience of God, which he called the Inner Light.

He started traveling all over the country preaching and converting people to ‘The Friends of the Light’. He was frequently punished and imprisoned for preaching his radical vision, which included denouncing the need for priests or churches as they prevented ordinary people from a direct and personal experience of God. He also preached against the payment of taxes, the swearing of oaths and expounded his conviction that a belief in God was incompatible with warfare.

Margaret Fell was one of the most influential figures in early Quakerism. An early convert to the teaching of George Fox, she was the wife of a judge in the Lake District in the north of England. Her home, Swarthmoor Hall, became a place of sanctuary and refreshment and is still used today as a Quaker study centre and place to stay. After the death of her husband, she married George Fox and until her death in 1702, worked tirelessly to make Quaker ideals and practices known. She was resolute in petitioning King Charles II on Quaker rights and freedoms and was imprisoned for two years for refusing to swear an oath and for allowing the outlawed Quaker form of worship to take place in her home. She published Women’s Speaking Justified on the role of women in religious leadership in 1666.

William Penn was persuaded by Quaker teaching when he was 22. As Quakers were prohibited from attending university, this cost him his place at Oxford. He became a close friend of George Fox and travelled with him throughout England the Europe. He was an avid writer and preacher. In 1670, he was arrested for unlawful preaching with fellow Quaker, William Meade This case led to the right for English juries to be free from control by judges. In 1677 King Charles II granted Penn land in the colonies in America, land which eventually became Pennsylvania, founded on Quaker principles of defending religious freedom, democracy and opposition to war.

John Woolman was a grandson of one of the first Quaker settlers in Pennsylvania and became one of the most outspoken opponents of all aspects of the slave trade and slave ownership. He lived passionately by the Quaker tenets of integrity, equality and simplicity and believed that slavery and everything that it involved, contravened his deepest convictions at every level. He spent much of his life travelling, often on foot, visiting many areas of America including the deep south, and also visiting England. He believed that all people of all nations were of one blood and therefore equal and that the trading in and ownership of people was wholly against the will of God and wholly corrosive for both the slave and those who considered themselves as ‘masters’.  His life and witness played a vital role in the abolition of the slave trade and slave ownership on both sides of the Atlantic.

He kept a diary throughout his years of ministry which remains in print today. 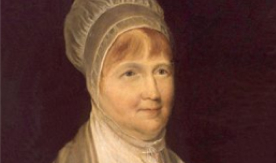 Elizabeth Fry was one of the earliest advocates for the reform of prisons and the establishment of programmes for the rehabilitation of prisoners throughout the UK. From 1813 until the time of her death in 1845, she campaigned relentlessly, addressing not only prison reform, but all aspects of the social deprivation that led to crime – poverty, lack of education and skills.  She worked in Newgate prison, establishing educational programmes for the prisoners and their children, visited transport ships and advocated on the prisoners’ behalf to improve their circumstances on board. She set up night shelters and established societies for the support of women prisoners returning to society.  She also founded a nursing school which was later to inspire Florence Nightingale in her work. Elizabeth Fry was an influential speaker and writer and she won a lot of ‘people in power’ to her cause. These included Queen Victoria and Prime Minister Robert Peel who actively supported her work, enabling many of her initiatives to become common in prisons throughout the country.

The name of Cadbury is synonymous with chocolate – and Quakerism. George Cadbury’s father John was a tea, coffee and later, chocolate dealer in the centre of Birmingham in the English midlands. His son George entered the family business in the 1860s and soon he became aware of the squalid conditions that workers in many factories in Birmingham had to endure as well as the social evils of poverty, poor sanitation and alcohol. He believed that every person had the right to respect, and to have the basics of education, employment, decent working and housing conditions and fair pay. He realised that these were simply not available within the rapidly growing industrial city.  As his business, based on chocolate that was ‘Absolutely Pure – therefore the best’ became more successful he bought a large tract of land outside the city and used it to build what he hoped would become a prototype for other industries.

The large, airy Cadbury factory at Bourneville was the centre of a development which included over a thousand houses with good sanitation, playing fields and other recreational areas, schools and churches for the workers, an adult education centre, shops and care facilities where children could be supervised while their mothers had a day free to care for their homes. Every effort was made to provide an environment in which workers and their families could thrive, with tree lined streets, park areas and gardens surrounding every house so that families could grow their own produce. The Cadbury family themselves lived on a nearby property, Woodbrooke, which is today an educational and study centre and hotel for Quakers and other groups.