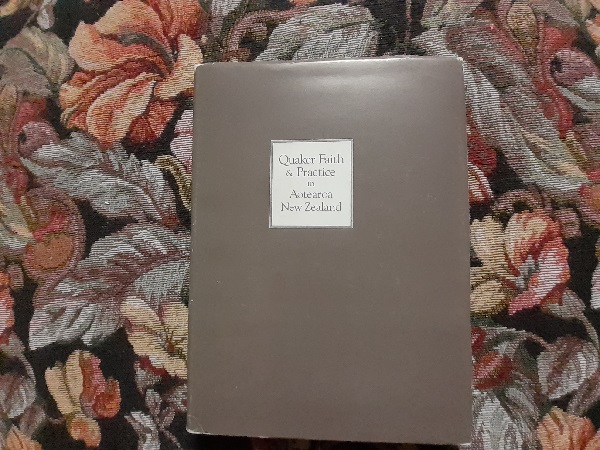 This book is offered as a source of inspiration, information and understanding of Quaker thought and experiences in Aotearoa New Zealand. It has been compiled from contributions sent by Friends from all over the country and consists of both contemporary writing and extracts from our various archives and collections since the arrival of the first Quaker settlers, about 1835, until 2003.

Hundreds of contributions were received. There followed a process of reading and selection which involved Friends in every Meeting forming small Consideration Groups. These groups read through the material submitted, and commented for the guidance of the committee set up by Yearly Meeting to oversee the project and bring it to completion.

The Religious Society of Friends (Quakers), Te Hähi Tühauwiri, does not formulate creeds, doctrines or dogma; rather Quakers try to live the revelation that something of the divine, ‘that of God’, is within every person. Knowledge of this presence came to George Fox in the middle of the seventeenth century, when, in the religious turmoil of the time, he had sought in vain for spiritual enlightenment and guidance from theologians and well-known preachers. In near despair, he came to feel the certainty of an inward presence assuring him that ‘There is one, even Christ Jesus, that can speak to thy condition.’ Inspired by this, George Fox founded a movement that did not rely on priests, preachers, liturgy, physical sacraments or sacred buildings.

Ever since, Quakers have sought to listen, individually and in group worship, for the inner voice of God to lead them in new lives and a different form of worship. This book illustrates the experience of Friends as they have attempted to follow these leadings in Aotearoa New Zealand.

The early Quaker settlers came from Britain and although Quaker immigrants also came from other countries too – such as Ireland, the Netherlands and the United States – until 1964 the Religious Society of Friends (Quakers) in New Zealand was part of British Quakerism under the aegis of London Yearly Meeting. The British book ‘Quaker Faith and Practice’ is used by Friends in Aotearoa New Zealand as it contains accounts of the experiences of Quakers from the beginning of Quakerism, but a need has increasingly been felt to compile, in addition, our own book. ‘Quaker Faith and Practice in Aotearoa New Zealand’ is therefore complementary to the ‘Quaker Faith and Practice’ of Britain Yearly Meeting, and reflects the life and thought of Friends in this country up to this time. (Our ‘Quaker Handbook’ was published by Yearly Meeting in 2000).

We are seekers, but we are also the holders of some precious discoveries. As each generation grows, we must find the Light for ourselves, and interpret it. We can then hand on to future generations this history of lives lived faithfully, insights gained, at times painfully, but above all our vision of the truth which will, again and again, grow and change. This volume therefore, can never be complete, but is our first attempt to gather together these threads.

Through the process of reading and reflection we have struggled for our authentic voice growing out of the colonial experience, influenced by the indigenous culture and the natural world. This book is one sign that we now have our own Quaker stories. We acknowledge the rich historical framework of our European Quaker heritage on which we are now weaving our own spiritual cloth, as richly coloured as the pohutukawa in bloom, as bright and clear as the light on the moana Pacific. Invisible among these threads are those Friends who did not leave behind a written legacy but whose lives also sustained the developing identity of Quakers in Aotearoa New Zealand.

We hope that you will find within these pages help on the spiritual journey, and new insights, along with knowledge and appreciation of the many Friends who have contributed to Quakerism in this land.

Committee of Oversight for the Faith and Practice Project: