How do people like Rob and Heather List get to a point where they put their money where their mouths are and try to walk lightly as well as cheerfully upon the earth?  It starts a long way back with the attitudes and actions of parents.  Heather's Dad was from a tramping and mountaineering family and was a very active member of the Tararua Tramping Club.  He passed on that enthusiasm to his daughter.  Rob's family tooking their fishing and hunting seriously, with most holidays spent under canvas in the beech forest of Southland.  They were active in the Save Manapouri campaign, back when the vocabulary of environmental activism was just an egg.  It's not surprising then that the Lists have hatched into Green Party members.

They both grew up in the Presbyterian Church, where the integrated oneness of the earth, e.g. Romans 8:18-25, and human responsibility for the earth's well-being were basic tenets.  The understanding that the Creation speaks to us profoundly of the nature of God, if we are willing to look and listen, has never left them.  Those foundations were ready to be built upon when Rob and Heather came to Friends in the 1960s.  The testimonies of the sacramental nature of life, simplicity, peace making and answering to that of God in everyone fitted well, like the second hand clothes the Lists favour.  In August 2010 they became inspired to reduce their landfill contribution to one bag a year.  Looks like they'll get there without bursting the bag.  Really, it's not that hard to do.  Think about what you buy, especially how much packaging is involved and be conscientious about composting and recycling.

Currently they live in a house that is a development of the bush huts they have enjoyed.  It is clad with green colorsteel, insulated with recycled wool and lined with plantation grown timber.  The tiled floor absorbs the warmth of the sun in winter, but the verandah keeps out the higher summer sun, allowing the floor to cool the house.  Double glazing stabilises the indoor temperature year round.  On the roof solar panels heat the water and generate over 90% of the electricity used by the highly efficient appliances and lighting.  In the kitchen a modern version of the ancient hay box does the slow cooking.  A woodburner in the very centre of the house spreads extra heat in winter and provides additional cooking capacity.  This is the sort of house you must learn to drive, looking forward to plan extra energy use in relation to the weather forecast.

The lanscaping recreates a bush clearing which the birds enjoy as much as the human residents.  Off to one side raised beds provide organically grown vegetables.  Both the Lists work part-time and Rob sees his vegetable gardening as income, though some crops can provide the promise and the bankruptcy of a flashy finance company.

The garage is home to a Honda Jazz, low on fuel use and emissions, three bikes and a tandem which get a lot  more use since a mid-winter trip to Cambridge and its multifareous cyclists revealed how soft Kiwis have become.  That has inevitably led to advocating for improved cycling facilities.

Beside the woodshed is the bird hospital.  For some years the Lists have nursed injured and sick native birds for the local DoC office, which is just down the road.  While kahu (harriers), tui and kereru are the usual suspects, there have been amongst others, kotare (kingfishers), ruru (morepork), a mottled petrel taking a rest on its way to the Aleutians, a Giant Southern Petrel and a huge Shy Mollymawk (think albatross).  To hold birds like these is a beautiful privilege.  To be held in turn by a hawk, even through a glove, can remind the holdee that we are frail creatures.  This work can be a heartache too, as the survival rate is only about 50%.

For variation Rob has taken to spending Tuesday mornings (morning being an elastic word) working in a Forest and Bird restoration project.  Amongst other things he has inherited the task of monitoring the health, and hopefully growth, of a population of mudfish.  Part of the inheritance is a pair of thigh waders.  Conservation work is very glamorous.  And then there are the monitors to discover the presence of long tailed bats, which involves bungee strapping hi tech lunch boxes up trees.  It's all fun and it builds great friendships.

No lifestyle is ever completed and finished.  The Lists have more projects on the go.  A worm farm, a solar oven and a pulley clothes airer to mention three.  All use recycled bits and bobs.  Replacing a flush toilet with a composting one is under way.  The big thing the Lists would want you to know is that their life is not a grim self-sacrifice to a politically correct duty.  It is interesting, mentally stimulating, building of friendships, deeply satisfying and most definitely joyful.

The Lists became somewhat famous in New Zealand by producing one rubbish bag of rubbish in a whole year, a story picked up by the media. Robin comments: "Contrary to the caption in the 1st one Heather isn't a strong-eyed heading dog. Dear old Gem, she's gone too; my nephews and oldest son are greying and on Friday I met my great-great niece. Too young to have the accent yet.
Still, look at what we have done; and I used to teach our lifestyle as a guest class in the Wananga money management course in Masterton. No waste." 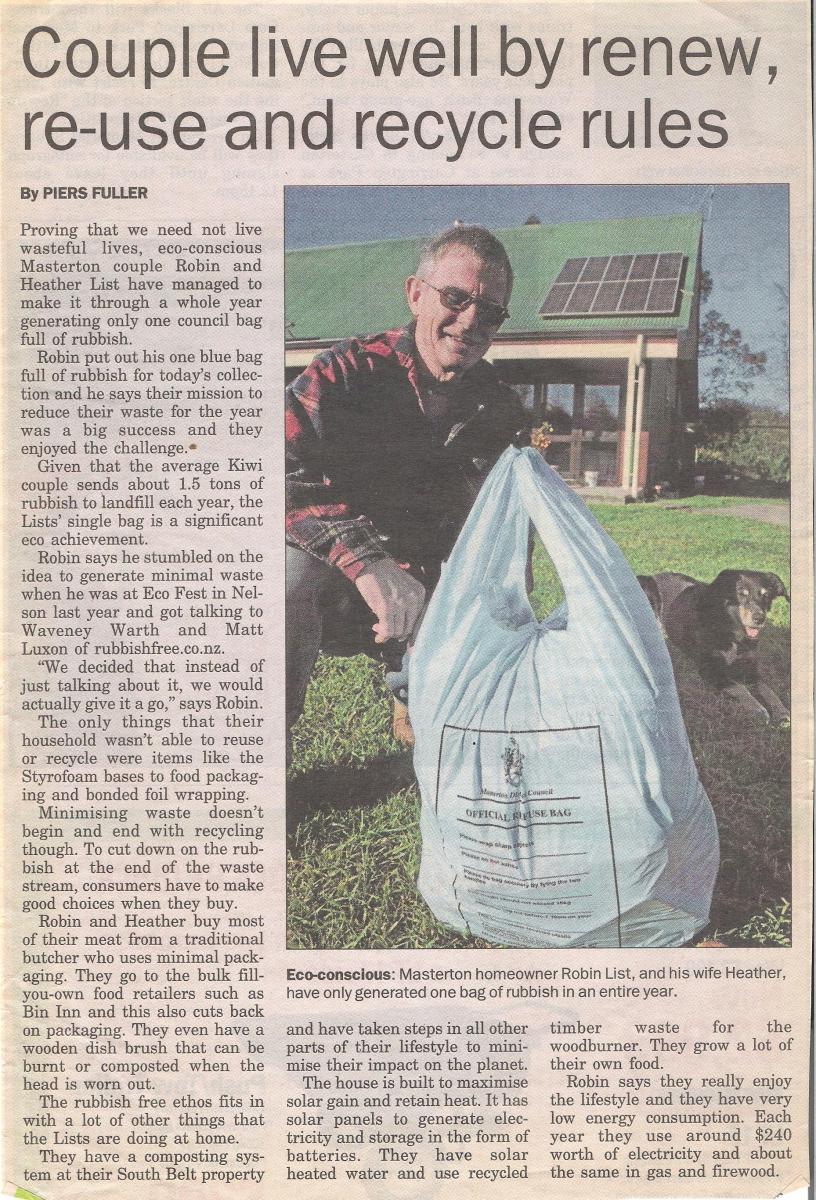 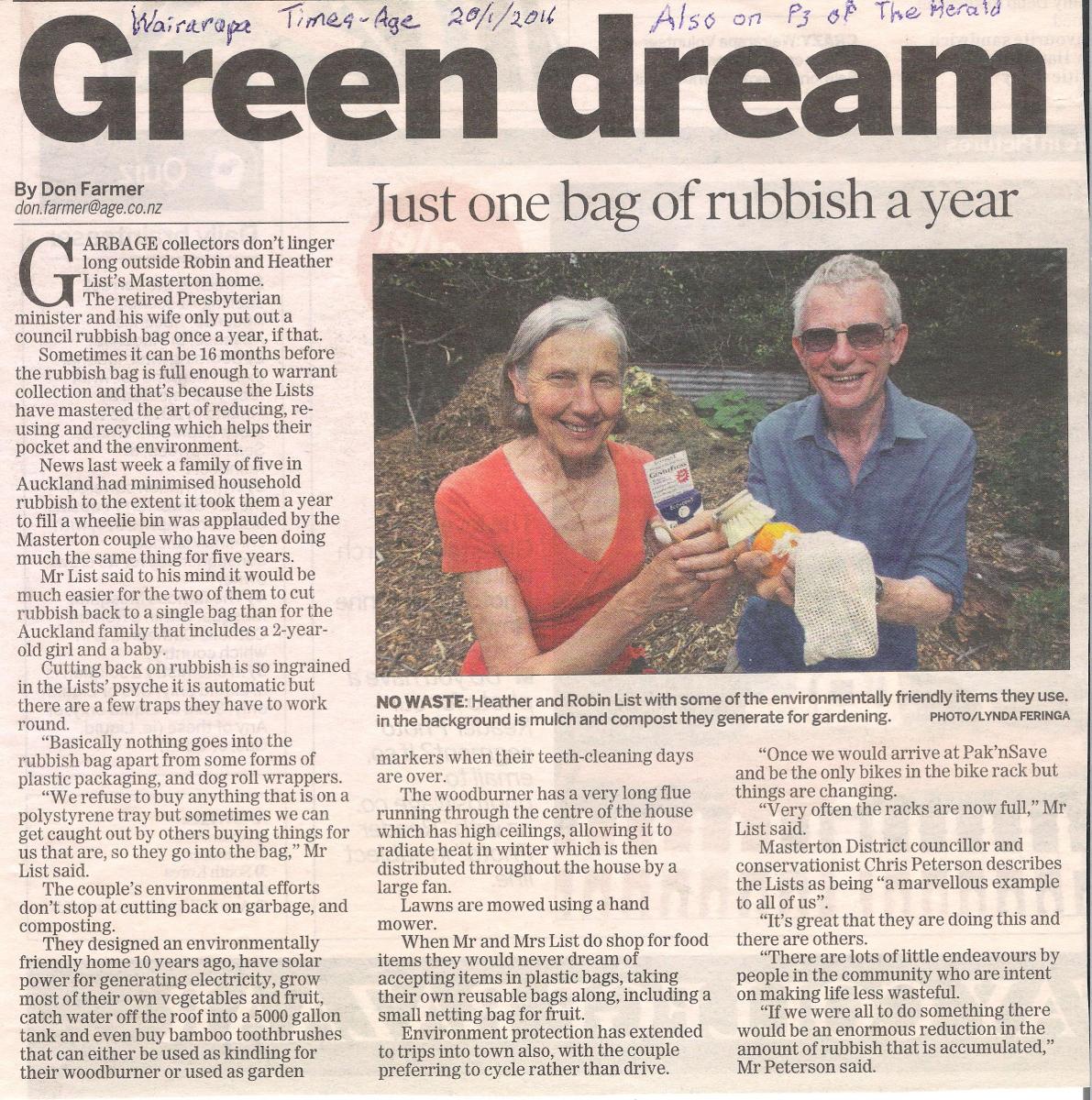